Congenital anomalies in calves are found in different regions of bodies. Generally, anomalies encountered in the facial region shape as fronto-nasal, maxillar or mandibular. In addition varied pathologies such as meningocele, cleft palate, nasal dermoid cyst, gingival vascular hamartoma area are encountered in the head. In this case report, it was aimed to report clinical and surgical result of palathoschisis, brachygnathia inferior and accessory mandibular mass in a Simental breed calf. A 3-day-old male Simmental calf was presented to Bursa Uludag University, Faculty of Veterinary Medicine, Department of Surgery Clinics with the complaint of milk comes from the nose after sucking and a distinctive structure in the mouth. On clinical examination, submandibular lymph nodes were swollen but vital parameters were normal. Oral examination revealed a palatal cleft (palatoschisis), short stature of the lower jaw (brachygnathia inferior) and a free accessory mandibular mass in the passage between palatum durum and palatum molle. It was determined that calf had a suction reflex. The free mandibular mass was associated with the cleft palate and there were over the tooth-like structure. In palpation, the end of this mass was hard, the connected part was soft consistency. Radiographies of latero-lateral and ventro-dorsal positions on cranium were receipted in radiological examination. The position of the mandibular mass in mouth and brachygnathia inferior were located. Operative intervention of patient was decided. Xylazine HCl (0.1 mg/kg im) for premedication and ketamine HCl (4 mg/kg im) for induction were applied. After intubation, general anesthesia and maintenance were provided with 2% isoflurane. Intraoperatively, the mass was removed to separating connection area. Congenital cleft on palate was closed to use 0 suture silk with simple separate stitch. Calf was discharged to suggest postoperative antibiotics (penicillin-streptomycin, 1×1.5 cc, im, for 5 days), analgesic (flunixin meglumin, 1.1 mg/kg, iv, for 3 days) and oral antiseptic (10% glycerin iode). According to the information obtained from the owner on the 15th postoperative day, calf’s appetite was to be normal and mouth movements were reported to be relatively good. As a result, multiple anomaly including palathoschisis, brachygnathia inferior and accessory mandibular mass in a Simmental breed calf may be encountered in clinical practice and as in this case, the observed pathology was corrected by surgical intervention, and postoperative results were favorable. 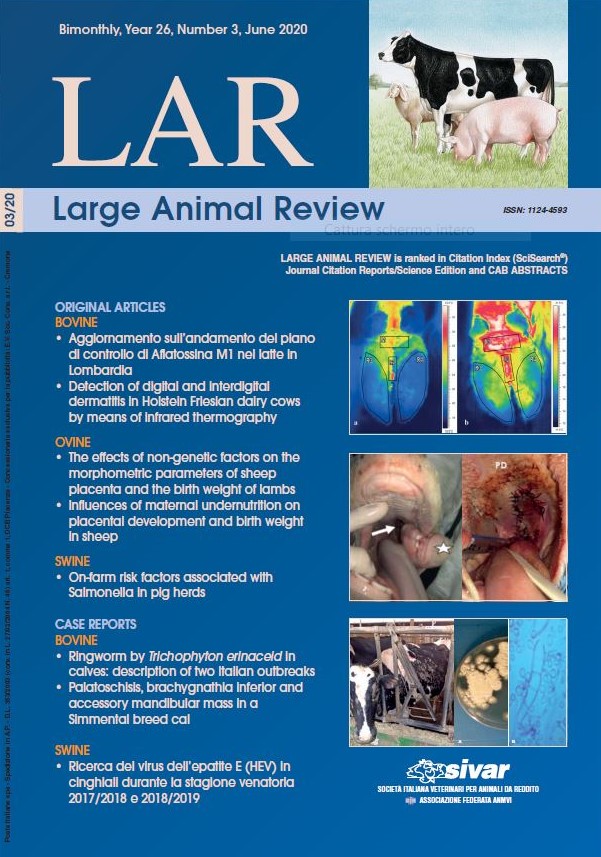