Traumatic abdominal hernias are common in small ruminants. Small ruminants, including goat and sheep are highly susceptible to acquired abdominal hernias. Injuries leading to the weakening of muscles can facilitate the contents to herniate through the abdominal wall. A three-year-old non-descript pluriparous full-term pregnant doe was presented to the Referral Veterinary Polyclinic and Teaching Veterinary Clinical Complex, ICAR-Indian Veterinary Research Institute, Izatnagar, with an exudating wound on the right lateral abdomen over a pronounced swelling. The doe was previously attacked and bitten by a group of stray dogs two months earlier, following which the swelling started to increase in size progressively. General clinical examination identified an extensive swelling on the right lateral abdomen with fluid thrill. Fetal parts and fetal movements were appreciable during palpation. The presence of a live fetus was confirmed within the hernial contents using radiographic and ultrasonic examination. A circular wound was also identified at the center of the swelling that produced a bloody discharge. The doe was subjected to emergency cesarean section under sedation and regional anesthesia. The uterus was found herniated through the oblique abdominal muscles into the subcutaneous space. Two live fetuses were recovered from the herniated uterus. The herniated contents were replaced into the abdominal cavity after relieving the adhesion between the intestinal loop and subcutaneous tissue. The hernial ring was freshened, and herniorrhaphy was performed using synthetic polyamide suture material (overlapping mattress sutures). Postoperatively the animal was treated with antibiotics and anti-inflammatory drugs. The traumatic lateral hernia was successfully reduced in the goat after performing an emergency cesarean section and herniorrhaphy. When the life of the fetus is at stake, hysterocele should be considered as a serious condition and emergency cesarean section has to be performed in cases where fully developed viable fetuses are present in the gravid uterus. 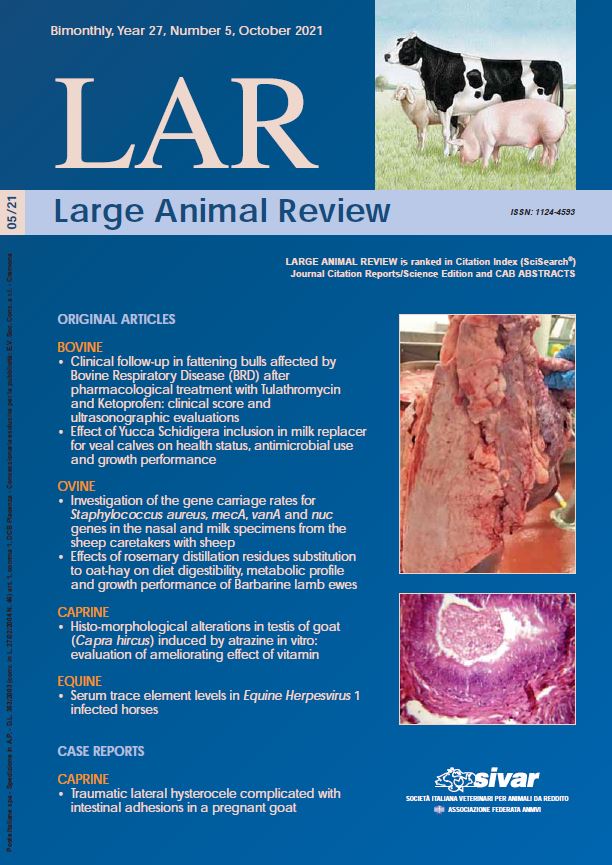