Doxycycline is a broad-spectrum antibiotic belonging to the tetracycline class. Its use is widespread in cattle breeding for the treatment of the bovine respiratory disease in calves, because it is easy to be administered orally. Moreover, a powder formulation is provided for doxycycline, which makes it easy to be dissolved in milk or its substitutes. In September 2018, in a dairy cattle farm in the province of Milan, the farmer, in order to treat a presumed respiratory disease, administered 100 mg/kg of doxycycline for 5 days to 10 Italian Fresian calves, causing the death of 9 of them. After the death of 4 animals, the veterinarian practitioner performed the full clinical examination of 6 calves that showed the same symptoms as those already dead. Two carcasses were subjected to necropsy at the Department of Pathology of the Veterinary Teaching Hospital in Lodi. The veterinarian practitioner performed the necropsy of 3 animals on field, and collected tissue samples for histological investigation. The organs were evaluated macroscopically and samples of heart, liver, kidneys, tongue and muscles semitendinosus, semimembranosus, biceps brachialis, diaphragm and external intercostals were collected. The formalin-fixed samples were trimmed and embedded. After the inclusion, 5µm sections were mounted on suitable slides. Histological examination was performed using the standard Hematoxylin-Eosin staining. Calcium deposits in the skeletal and myocardial musculature were observed with Von Kossa staining. The kidney sections were stained using the Periodic Acid Shiff reaction. Stained samples were read with an optical microscope. The disease of the animals included in this study followed a variable course from acute to hyperacute. In the only survivor, symptom remission occurred in about 15 days, but a marked growth retardation became evident. Tachycardia, tachypnea, lethargy and dysphagia, sometimes associated with mucus-purulent nasal discharge, were the symptoms occurring two days after the drug administration. According to the scientific literature, the most frequent lesions, both macroscopic and microscopic, were found in tongue, skeletal muscles and heart. This paper describes the clinical and the macroscopic and microscopic pathological findings during an accidental doxycycline overdose outbreak in calves in the field. In livestock farming, drugs might be improperly administrated without veterinarian clinical examination, or any microbiological investigations, causing unpredictable consequences that cannot be managed by the farmer. The episode of intoxication reported in this paper is a striking example of a iatrogenic disease, in which a misinterpretation of the package leaflet led to the loss of 10 subjects, including 7 which were intended to restock the herd. 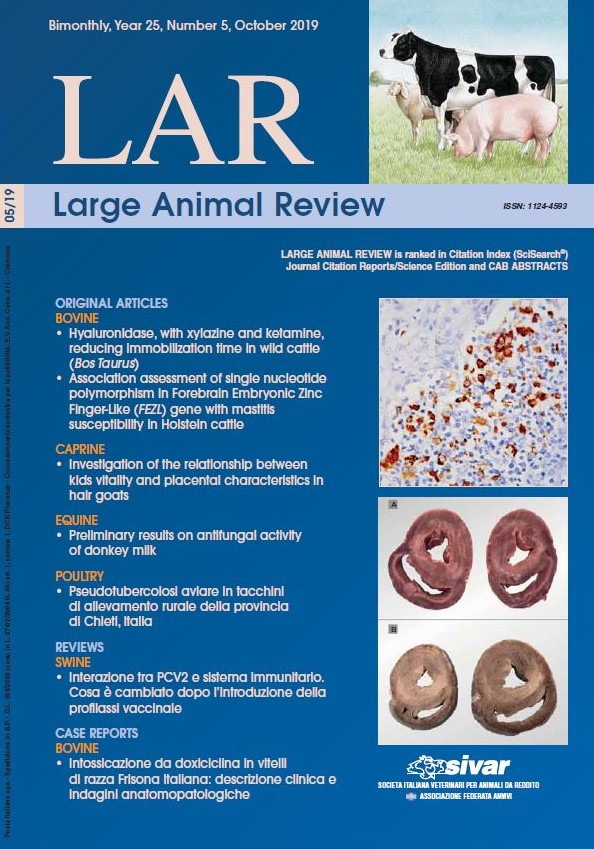