Varieties of incisional approaches to the skin and rumen for one-stage rumen cannulation could ameliorate some of the challenges of the technique. Following comparisons, incisional approaches with minimal surgical stress were established. Nine (n = 9) Yankasa-Balami cross-bred rams aged 1-2 years and weighing 39 0.9 kg were grouped into A, B, and C, each composed of 3 animals. Group A had primary incisions on the skin-muscle and rumen; group B had primary-secondary skin-muscle incisions and only primary rumen incisions; and group C, primary-secondary skin-muscle incisions and primary-secondary rumen incisions.
Blood sample were collected after the surgery, at 0 h, 4 h, 8 h, 12 h, 24 h, 48 h and 72 h, weeks 1, 2 and 3 postrumenostomy for sera that were stored at -20 °C until ELISA for TNF-α. The M±SE of TNF-α concentrations was calculated using Graph- Pad Prism version 9.0 (121) for Windows, and a One-way Repeated Measures ANOVA with Dunnett’s multiple comparisons test was used to compare sampling periods to their respective groups’ pre-values. A two-way repeated measures ANOVA with a Bonferroni post-hoc was used to compare the three groups (A, B, and C). Analysis was considered significant at p < 0.05. The precannulation serum TNF-α concentrations were 36 ± 0.66, 38 ± 4.8 and 38 ± 1.7 pg/mL for groups A, B and C, respectively. Compared
to respective Pre values, the concentrations became significantly (p < 0.05) higher in group A (19 ± 1.7) at 72 h and group C (73 ± 2.3 pg/mL) at 48 h. The TNF-α concentrations between-groups showed that at 0 h post-cannulation, the concentrations of TNF-α in groups B (72.35 ± 1.18) and C (85.47 ±11.78) were significantly (p < 0.05) higher than group A (26.4 ± 0.46 pg/mL). At 4 h, group C was significantly (p < 0.05) higher than group A while group B and C were significantly (p < 0.05) higher than group A, at 8 h. Group C had a significantly (p < 0.05) higher concentration than groups A and B at 12 h. The finding that group B had lower concentrations of the TNF-α than group C suggests that the numerous incisions were responsible for the TNF-α surge. The application of primary incisions on the skin and rumen alone influences the numerical concentration of serum TNF-α, and this effect is amplified when a number of secondary incisions are added to the skin and/or rumen. The application of primary incisions on the skin and rumen alone, as well as the length of incisions, influences the release and numerical concentrations of serum TNF-α, particularly when the number of primary incisions or secondary incisions are applied to the skin and/or rumen. Although the incisional patterns used did not preclude cannula drops, initial incisions on both the rumen and skin alone were a preferable choice in terms of the surgical welfare of the animals. The adoption of wider inner and outer rubber flanges avoided cannula drops, making primary incisions on both the rumen and skin alone a superior incisional technique due to the
reduced surgical stress on the rams. Thus, above other adopted traditional procedures in the bovine species, the use of primary incisions on both the rumen and skin is by far the cheapest and least stressful incisional strategy for rumen cannulation in the ram. Overall, the use of locally improvised polyvinyl chloride plastisol for ram cannulation was successful. 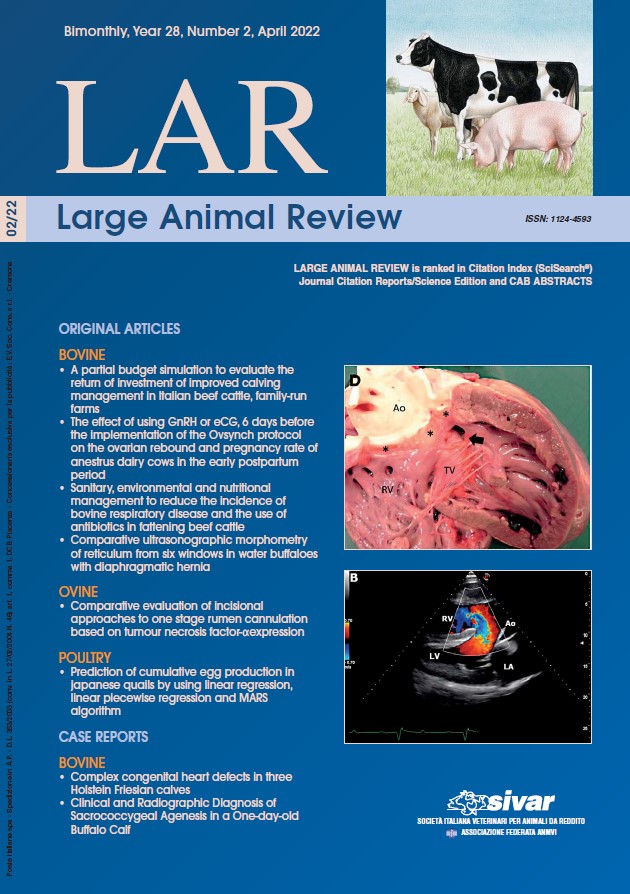