TFertility is a key variable in bovine production. Although both sexes take part in the pregnancy results, the fertility of bulls plays a fundamental role. In the last twenty years, ultrasonography (US) has begun to be considered a non-invasive tool for evaluating the structure and function of the male reproductive tract. The objective of this study was to evaluate the potential of testicular ultrasonography to predict the semen quality produced by bulls belonging to Semen Collection and Processing Centers (SCPC).
A total of 57 semen-donor beef bulls were included in the study. Bulls were between 1.5 and 10 years of age and comprised the following beef-producing breeds: Angus, Brangus, Braford, Limangus and Polled Hereford. Ultrasound images were taken using an EXAGO® ultrasound (ECM Angulemme, France) with a multifrequency linear transducer configured at 7.5 MHz. The images were analyzed using the ECOTEXT® software. A correlation analysis was carried out between all the Ecotext variables (EC1= black pixels, EC2= white pixels, EC3= mean gray level of pixels, Density= density of hypoechoic areas (HA), Diameter= mean diameter of HA and Area percentage of HA in the total area of the region of interest) and semen quality. A highly significant negative relationship was observed between the percentage of abnormal heads and EC2, EC3 and tubule diameter (r= -0.37; -0.52; -0.37 respectively). Diameter was also negatively correlated with the percentage of other sperm morphological abnormalities (r= -0.30). EC1 was positively correlated with the area, density and diameter of the seminiferous tubules (r=0.69; 0.46 and 0.53, respectively).
All bulls with up to 115 HA/cm2 produced semen that was not apt for freezing. In conclusion, despite having shown different levels of association between the Ecotext parameters and semen quality, it remains necessary to continue the studies to be able to confirm the use of this tool to predict potential fertility of semen-donor bulls from SCPC. 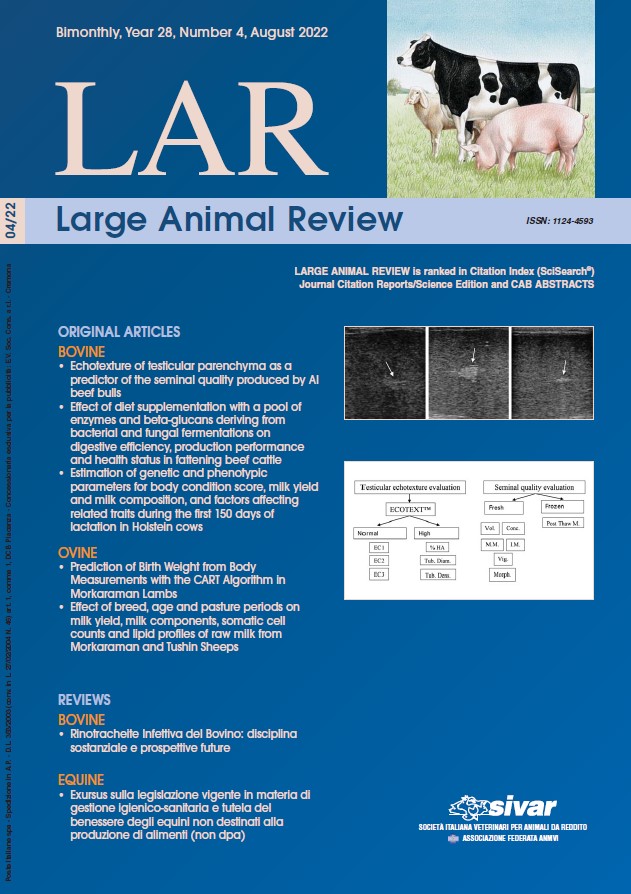